The Oncology Podcast, brought to you by oncologynews.com.au, is proud to present the latest episode in our ‘The OJC Meets…’ series in which Professor Eva Segelov chats to Andrew Denton, Aussie comedy legend and most recently, founder of the Go Gentle organisation.

Is there anything funny about euthanasia?

This poignant and thought-provoking episode explores the intricacies of voluntary assisted dying.

Eva Segelov meets Andrew Denton, the Australian comedian, Gold Logie-nominated television presenter and podcast host. Andrew is also the founder of Go Gentle, an organisation whose role he sees as the shop stewards for the terminally ill.

Doctors have the AMA and other unions. We see ourselves as the shop stewards for the terminally ill. Andrew Denton

In this personal and moving interview, Andrew advocates for access to VAD for terminally ill patients, sharing valuable insights from his experiences, research and the systems in place in European countries. Eva has an interest in academic clinical trials in GI and breast cancer and has been a member of the AGITG since 2003. She has clinical trials expertise, links with national and international trials groups, and extensive experience with adult medical education. Connect with Eva on Twitter here: @profevasegelov 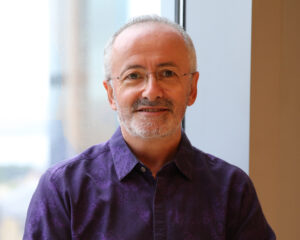 In 1997, Andrew Denton witnessed the slow, painful death of his father Kit Denton. Determined to help others avoid this suffering, Andrew has led an intellectually rigorous debate in Australia about death and dying.

Drawing on his love for stories and 30-plus years in the media, Andrew has campaigned to introduce compassionate laws around voluntary assisted dying (VAD) that provide protections for the vulnerable. His two, ground-breaking podcast series, Better Off Dead, cover the personal stories, and moral arguments on both sides, and legislation from countries with VAD laws.

He formed the organisation Go Gentle Australia in 2016 to help Australians with untreatable or terminal illnesses, as well as their families and carers.

Andrew’s campaign for a VAD law in South Australia in 2016 was narrowly defeated by one vote. He has led successful advocacy campaigns to introduce VAD laws in Victoria (2017), Western Australia (2019), and Tasmania, South Australia and Queensland (2021). With thanks to Eva Segelov, Andrew Denton and Graham Knowles.