ombining radiotherapy with a virus that targets cancer cells kicks both treatments into overdrive to treat the deadliest form of skin cancer, a new study shows.

Scientists at The Institute of Cancer Research, London, and The Royal Marsden NHS Foundation Trust combined a virus, called oncolytic reovirus RT3D, with radiotherapy to treat melanoma, and found that the combination was much more effective than separate treatments.

In cell samples and in mice with the disease, the combination killed significantly more melanoma cells than either treatment on its own. 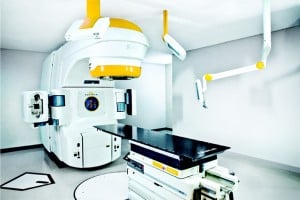 The findings show that combining oncolytic viruses with radiotherapy could be an exciting new way to treat melanoma.

The study was published in the journal Oncotarget and funded by the Rosetrees Trust and the Oracle Cancer Trust, with additional support from the National Institute for Health Research Biomedical Research Centre at The Royal Marsden and the ICR.

Reoviruses are common viruses that are generally harmless to normal cells, but they can be deadly to cancer.

Previous research has shown that the oncolytic virus RT3D is resistant to high doses of radiation, and so could be used with radiotherapy to treat skin cancers like melanoma.

Researchers at the ICR and The Royal Marsden treated melanoma cells using combinations of radiotherapy and RT3D, to investigate their effects on cellular mechanisms in melanoma.

The RT3D virus showed higher replication rates in melanoma when used with radiotherapy, helping it to kill more cancer cells than either treatment separately.

In mice with melanoma, the combination was significantly better at shrinking tumours and prolonging survival than either treatment independently.

Professor Kevin Harrington, Joint Head of the Division of Radiotherapy and Imaging at the ICR and a consultant at The Royal Marsden, said: “Once melanoma has started to spread it is hard to treat effectively and often will not respond well to radiotherapy on its own.

“Our study found that delivering radiotherapy with an anti-cancer virus created an effective combination treatment with the potential to benefit patients with melanoma.”
[hr] Source: ICR