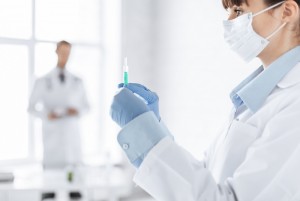 The possibilities for personalised vaccines in all types of cancer are revealed today in a lecture from Dr Harpreet Singh at the ESMO Symposium on Immuno-Oncology 2014 in Geneva, Switzerland.

“One of the biggest hurdles in cancer immunotherapy is the discovery of appropriate cancer targets that can be recognised by T-cells,” said Singh, who is scientific coordinator of the EU-funded GAPVAC phase I trial which is testing personalised vaccines in glioblastoma, the most common and aggressive brain cancer. “In the GAPVAC trial we will treat glioblastoma patients with vaccines that are ideal for each patient because they contain personalised antigens.”

For all patients in the GAPVAC study, researchers will identify genes expressed in the tumour, peptides presented on the human leukocyte antigen (HLA) receptor (i.e. peptides which will be seen by T-cells), cancer specific mutations, and the ability of theimmune system to mount a response to certain antigens. Based on this information, two vaccines, called actively personalised vaccines (APVACs), will be constructed and administered following conventional surgery.

The first vaccine will be prepared from a warehouse of 72 targets previously identified by the researchers as relevant for treatment in glioblastoma. These peptides have been manufactured and put on the shelf ready to be vaccinated in patients. Patients will be given a cocktail of the peptides they express and which their immune system can mount a response to.

Singh said: “A patient may express 20 of these 72 targets on their tumour, for example. If we find that the patient’s immune system can mount responses to 5 of the 20 targets, we mix the 5 peptides and give them to the patient. We mix the peptides off the shelf but the cocktail is changed for each patient because it is matched to their biomarkers.”

The second vaccine is synthesised de novo based on a mutated peptide expressed in the tumour of the patient. Singh said: “That peptide is not in our warehouse because it just occurs in this one single patient. The patient receives APVAC-1 and APVAC-2 in a highly personalised fashion in a way that I think has never been done for any patient.”

He added: “GAPVAC has two major goals. One is to show that personalised vaccines are feasible, since this is one of the most complicated trials ever done in cancer immunotherapy. The second is to show that we can mount far better biological responses in these patients compared to vaccination with non-personalised antigens.” Singh’s previous research has shown that vaccination with non-personalised antigens leads to better disease control and longer overall survival in phase I and phase II clinical studies in patients with renal cell cancer.

Singh said: “For the non-personalised vaccines we used off-the-shelf peptide targets that were shared by many patients with a particular cancer. Using this approach we have successfully vaccinated patients with renal cell cancer, colorectal cancer and glioblastoma.”

He added: “During this research we identified other targets that appeared in very few patients or even, in extreme cases, in a single patient. Often these rarer peptides are of better quality, meaning they are more specifically seen in cancer cells and occur at higher levels. This led us to start developing personalised cancer vaccines which contain the ideal set of targets for one particular patient. We hope they will be even more effective than the off-the-shelf vaccines.”

Singh believes that personalised vaccines hold promise for all types of cancer, and that personalisation could also be applied to adoptive cell therapy.

He concluded: “Personalisation is not limited to vaccines but is a general principle that could be applied to cancer immunotherapy more broadly. We are starting with vaccines but we are also thinking about how to use personalised antigens in adoptive cell therapy.”