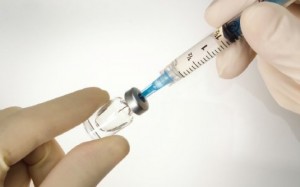 Experts are divided on the value of lung cancer vaccination after disappointing results from the MAGRIT phase III trial.

Professor Johan F. Vansteenkiste, first author of the MAGRIT trial and professor of medicine, Catholic University Leuven, Belgium, said: “The vaccine used in the MAGRIT trial may provide benefit if combined with immune checkpoint inhibitors that reverse the tumour’s ability to paralyse the immune system. New formulations of vaccines may also perform better.”

But Dr Martin Reck, chief oncology physician, Department of Thoracic Oncology, Hospital Grosshansdorf, Germany, said: “The results of the MAGRIT trial are disappointing for investigations of vaccines, particularly in non-small cell lung cancer, because there are now several big phase III trials which did not meet the primary endpoint. The concept of vaccination in lung cancer has to be questioned and checkpoint inhibition might be pursued instead.”

But cure rates remain low at around 45% and post operative chemotherapy is in general poorly tolerated by patients who have lung cancer surgery.

In the search for better adjuvant treatment after lung cancer surgery, the MAGRIT trial investigated MAGE-A3 cancer immunotherapy (also referred to as the MAGE-A3 vaccine).

The MAGE-A3 protein is present in one-third of lung cancer tumours but not in normal cells making it a suitable target for drug treatment. The vaccine previously showed anti-cancer activity in metastatic melanoma1 and in a small study of resected lung cancer.2

Vansteenkiste said: “The MAGE-A3 vaccine is very well tolerated. And in the earlier studies we found a predictive biomarker that identified patients who might have the biggest benefit from that type of treatment.”

In the MAGRIT trial, nearly 13,500 patients who had lung cancer were screened for the presence of the MAGE-A3 protein in their tumour sample.

As expected, 4,210 patients (about one-third of the 12,820 valid samples) had the MAGE-A3 protein and were eligible for the trial.

After excluding patients who did not meet other eligibility criteria, the remaining 2,272 patients were randomised 2:1 to receive either the active MAGE-A3 vaccine or placebo.

Vansteenkiste said: “It was a very large study but unfortunately the survival curves are superimposed. Adjuvant treatment with MAGE-A3 cancer immunotherapy did not increase disease free survival compared to placebo in the overall population (first co-primary endpoint) or in the patients who did not receive chemotherapy (second co-primary endpoint). Many patients in the latter group did not tolerate chemotherapy and the vaccine would have been a good alternative.”

He added: “The search for a predictive biomarker (third co-primary endpoint) was abandoned because of the lack of any beneficial treatment effect.”

Commenting on the implications of the results for patients with non-small cell lung cancer, Vansteenkiste said: “MAGRIT was the largest therapeutic trial ever done in non-small cell lung cancer. It joins the list of failures in the last 10 years to find an adjuvant treatment that improves outcome after lung cancer surgery. Other attempts include personalising chemotherapy according to predictive biomarkers and the use of targeted agents such as EGFR blockers – but these strategies have not been beneficial in large scale testing.”

Regarding the future of vaccines for lung cancer, Vansteenkiste said: “We need to go back to the bench to better understand the mechanisms of action. Lung cancer has a particular immunosuppressive environment in which factors in the tumour paralyse the immune system in close proximity to the tumour. Several lung cancer vaccination trials have shown that vaccines create effective soldiers, i.e. antibodies and immune cells that are able to kill tumour cells and have a treatment effect. But the problem occurs when they come to the battlefield, i.e. the environment of the tumour, where they are paralysed by factors in the tumour.”

He continued: “The more recent checkpoint inhibitors are the agents that can probably reverse this process and allow the vaccine to kill tumour cells when given in combination. Another promising area is the other vaccines in different phases of development for lung cancer patients. The MAGRIT trial confirms that vaccines are very well tolerated with mild side effects and no increase in immune-mediated disorders.”

Reck agreed that the MAGE-A3 vaccine was not harmful to patients but was less optimistic about the implications of the MAGRIT trial for vaccines in general.

He said: “When the trial was designed we were enthusiastic because we had a target, a good drug with the immune stimulatory addition, and we felt we were acting very early in the disease. If any immunotherapeutic approach was going to work, it should have been in this setting and the results are therefore a big disappointment.”

Commenting on future research directions for patients with non-small cell lung cancer, Reck said: “Until now, two types of immunotherapy have been followed. MAGRIT is the most recent and largest trial of antigen specific immunotherapy using vaccines and in common with other trials could not show any improvement in efficacy. There are some subgroups which might benefit but I’m not sure whether we will be able to run these new trials.”

He concluded: “Antigen independent immunotherapy using checkpoint inhibitors is in contrast very encouraging and we are looking forward to seeing the first confirmation data. With regard to immunotherapies we are witnessing a change, with clinical trials in lung cancer concentrating on checkpoint inhibition.”