When malignant melanoma metastasizes to the brain, it is a death sentence for most patients.

Metastatic melanoma is the deadliest of the skin cancers and the mechanisms that govern early metastatic growth and interactions of metastatic cells with the brain microenvironment remain shrouded in mystery.

A new Tel Aviv University study reveals a novel way of detecting brain micrometastases months before they transform into malignant inoperable growths. According to the research, micro-tumor cells hijack astrogliosis, the brain’s natural response to damage or injury, to support metastatic growth. This knowledge may lead to the detection of brain cancer in its first stages and permit early intervention.

The study was led by Dr. Neta Erez of the Department of Pathology at TAU’s Sackler Faculty of Medicine and published inCancer Research.

Following the path to cancer

The detection of metastasis depends on imaging techniques that still can’t detect micrometastases. Melanoma patients whose initial melanoma was excised believe that everything is fine for months or years following the initial procedure.

But following the removal of the primary tumor, micrometastatic cells learn to communicate with cells in their new microenvironment in the brain—cells which are, at first, hostile to them. But eventually a tumor appears. These cells travelled across the body to the brain or other organs but were undetectable at the micro level. When they become detectable, it is too late for treatment.

Dr. Erez calls the period of the initial growth of disseminated micrometastatic cells in distant organs the metastasis’ “black box”—the history of melanoma in the brain. “We believe that we have found the tools to characterize this black box,” said Dr. Erez. “And this is key to developing therapeutic approaches that may prevent brain metastatic relapse. 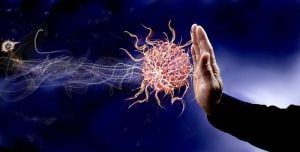 “Every organ in body has a defense system that detects intruders,” said Dr. Erez. “Much of this is regulated by support cells in the brain. When there is tissue damage due to a stroke or viral infection, these cells are activated and induce an inflammatory response.

“At the earliest stages of metastasis, we already see astrogliosis and inflammation. The brain perceives the micrometastatic invasion as tissue damage, activating inflammation—its natural defense mechanism. We found that the inflammation unfortunately gets hijacked by tumor cells that are able to grow faster and penetrate deeper because the blood vessels in the brain are more permeable than in any other part of the body. We found that all of this happens very early on.”

Dr. Erez is currently studying detailed molecular pathways in the brain’s biological response to find a way to block the metastases. “We’re hoping to develop the detection tools for humans that we developed in mice,” said Dr. Erez. “We’re also trying to find molecular targets that will allow us to prevent metastasis rather than trying to treat it.”
[hr] Paper: H. Schwartz et al, Incipient Melanoma Brain Metastases Instigate Astrogliosis and Neuroinflammation,Cancer Research (2016). DOI: 10.1158/0008-5472.CAN-16-0485
Source: Tel Aviv University