Pancreatic cancer, the third leading cause of cancer-related deaths, is projected to be the second by the year 2030, according to a study in the journal of Cancer Research.

The five-year survival rate is only 8 percent, making it the only major cancer with a survival rate in the single digits. Despite rising mortality rates, pancreatic cancer is under-researched and underfunded, and there are few Food and Drug Administration-approved treatments to combat the disease.

With the current pipeline for drug discovery taking 10 to 15 years from the laboratory to use, and an estimated 41,780 who will die from the disease this year alone, time is of the essence.

Now, patients suffering from pancreatic cancer may soon face better treatment options due to the latest discovery by Dr. Reginald Hill, Archibald Assistant Professor of Cancer Biology at the University of Notre Dame and researcher at the Harper Cancer Research Institute. Hill’s research focuses on drugs that are already approved by the FDA to find out why those drugs are not working in patients with pancreatic cancer. 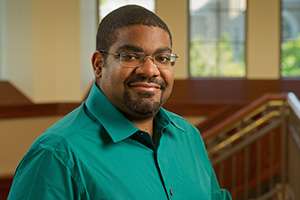 Patients suffering from pancreatic cancer may soon face better treatment options due to the latest discovery by Dr. Reginald Hill, who’s research focuses on drugs that are already approved by the FDA to find out why those drugs are not working. Credit: University of Notre Dame/Matt Cashore

“The bulk of a pancreatic cancer tumor is made of approximately 10 percent cancer cells and 90 percent supporting cells. Somehow, the supporting cells have figured out how to survive the chemotherapy,” Hill said.

“Microscopic vesicles called exosomes, bubbles with genetic material released by cells during chemotherapy exposure, are released from supporting cells, educating the cancer cells on how to survive, resulting in a tumor becoming chemoresistant.”

Research in the New England Journal of Medicine has revealed a majority of pancreatic cancer cases have proven to be resistant to chemotherapy and unresponsive to drug treatments found to be effective in other types of cancer.

Most new research has focused on destroying supportive cells. However, those studies concluded that when the supportive cells were attacked, patients actually developed more advanced cancer. “It was like poking holes into the area around the cancer cells and allowing it to spread,” he said.

Hill focused on blocking the release of exosomes, preventing the relay of information from supporting cells to cancer cells—which increased the efficacy of chemotherapy. This recently published study suggests that using an exosome blocker, which is nontoxic, in combination with standard-of-care chemotherapy will those with pancreatic and many other cancers as well.

The lack of effective treatments available to help thousands of those with pancreatic cancer is what drew Hill to his research. This latest discovery paves the way for those patients to have greater hope.
[hr] Paper: K E Richards et al, Cancer-associated fibroblast exosomes regulate survival and proliferation of pancreatic cancer cells, Oncogene (2016). DOI: 10.1038/onc.2016.353
Source: University of Notre Dame