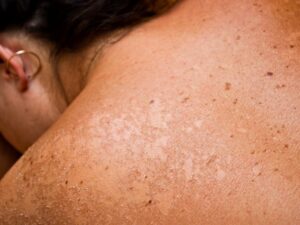 The investigational drug DEDN6526A, which is a new member of a class of drugs called antibody-drug conjugates, was safe, tolerable, and showed hints of activity against different forms of melanoma—cutaneous, mucosa, and ocular—according to results of a first-in-human phase I clinical trial presented at the AACR Annual Meeting 2014, April 5-9.

“As one of the first clinical trials to test an antibody-drug conjugate for the treatment of melanoma, we were encouraged by the initial responses,” said Jeffrey R. Infante, M.D., director of the drug development program at Sarah Cannon Research Institute in Nashville, Tenn. “We found DEDN6526A to have a well-tolerated safety profile, and more importantly, to benefit a substantial proportion of patients. It is particularly promising to see clinical activity in patients with mucosal as well as ocular melanoma, and we hope that patients who are enrolling in the ongoing expansion phase of the trial gain similar benefit.”

Antibody-drug conjugates consist of an antibody attached to a toxic chemotherapy by a special linker that keeps the chemotherapy inactive. In the case of DEDN6526A, the antibody recognizes the protein endothelin B receptor (ETBR) and the toxic chemotherapy is monomethyl auristatin (MMAE). Infante explained that when administered to the patient, the antibody portion of DEDN6526A recognizes and attaches to ETBR, which is often present at elevated levels on the surface of tumour cells in patients with melanoma. The whole antibody-drug conjugate is then taken up by the cells and MMAE is released from the linker to become active, killing the melanoma cells.

“ETBR is expressed at elevated levels on about 50 percent of melanomas,” continued Infante. “We can’t be more precise about this just yet because we are still developing a good assay to measure ETBR levels.”

Infante and colleagues enrolled patients with metastatic or unresectable melanoma in the dose-escalation phase of the trial. Each patient was administered DEDN6526A intravenously, once every three weeks. The initial dose tested was 0.3 mg/kg; the maximum-tolerated dose was determined to be 2.4 mg/kg, and this dose is being tested in the expansion phase of the trial.

Clinical benefit was observed by the researchers for 12 of the 19 patients who were assigned 1.8 mg/kg of DEDN6526A or more. Four of these patients, two with cutaneous melanoma and two with mucosal melanoma, had confirmed partial responses. The other eight patients, five with cutaneous melanoma, two with ocular melanoma, and one with mucosal melanoma, had stable disease for six or more months. In some cases, disease was stable for a prolonged period; for example, one patient is currently approaching two years on the study, according to Infante.

The researchers found that the most specific adverse event related to the study drug was infusion-related reaction, which was mitigated by amending the protocol to allow patients to receive steroids before their DEDN6526A infusion. Other adverse events reported were fatigue, anaemia, reduced numbers of immune cells called neutrophils, and neuropathy. According to Infante, these are all side effects that would be expected in patients being treated with toxic chemotherapy.

“With the initial findings, we have begun to look at whether clinical activity correlates with ETBR levels on a patient’s tumour,” said Infante. “Patients with all forms of melanoma expressing high levels of ETBR seem more likely to benefit from treatment with DEDN6526A, and we hope that further investigation of this biomarker for response to DEDN6526A will inform future development of this melanoma treatment.”