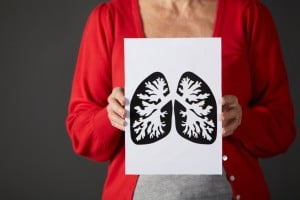 Younger patients – aged 50 to 64 – are more likely to be diagnosed with late stage lung cancer than older patients according to new data* being presented at the Cancer Outcomes and Data Conference** in Manchester, UK, today.

The new analysis shows that between the ages of 50 and 64, a higher proportion of patients were diagnosed at a late stage of lung cancer compared to patients aged 65-69.

People in their 70s are more likely to be diagnosed with early stage disease.

Researchers examined the records of around 34,000 lung cancer patients in England in 2013 to explore the association of early and late stage lung cancer and age.

Previous research shows that older patients may be diagnosed with certain cancers such as bladder and lung at an earlier stage compared to younger patients, but this is the first time this relationship has been explored using lung cancer data at a national level.

David Kennedy, Cancer Research UK’s data and research analyst, said: “Through harnessing the power of patient data we were able to detect this difference in the stage at which younger and older people are diagnosed with this disease.  Our results show that younger patients in their 50s and early 60s are more likely to be diagnosed with advanced lung cancer compared to patients in older age groups. Further analysis will focus on understanding this relationship to see if a similar pattern is present for other types of cancer.”

There are around 45,500 cases of lung cancer diagnosed in the UK every year***. Around six in 10 cases are in people over 70. Most lung cancer cases are diagnosed at a late stage.

Dr Julie Sharp, Cancer Research UK’s head of health and patient information, said: “This research is a great example of the importance of good quality data. It can lead to a better understanding of who is at an increased risk of different cancers. It can help target resources to the right groups in helping to improve cancer survival.

“It’s not clear exactly why younger patients are more likely to be diagnosed with advanced lung cancer, but what’s important is that the disease is caught early. Signs of lung cancer can include a cough that won’t go away or being short of breath. It’s vital that when people spot something unusual for them, they go to their doctor as soon as possible. Detecting cancer early is crucial as it offers the best chance of successfully treating the disease.”
[hr] Notes:
* Investigating the relationship between age and stage at diagnosis for lung cancer.
** http://www.ncin.org.uk/news_and_events/conferences/conference_2016
*** Number of new cases diagnosed in the UK from lung cancer (ICD10 C33-34) in 2013. More people with a known stage are diagnosed at an advanced stage (77% diagnosed at stage III or IV) than an early stage (23% diagnosed at stage I or II).