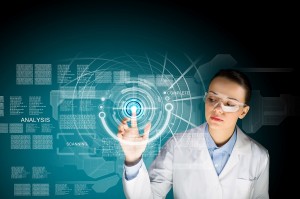 The world’s largest database for cancer drug discovery has been revolutionised by adding 3D structures of faulty proteins and maps of cancer’s communication networks, according to Cancer Research UK-funded research published in Nucleic Acid Research.

The updated canSAR database, developed at The Institute of Cancer Research, London, will allow scientists working in the UK and across the globe to design new cancer treatments more effectively.

The canSAR database was launched in 2011 by researchers in the Cancer Research UK Cancer Therapeutics Unit at The Institute of Cancer Research (ICR) – with the ambitious goal of using Big Data approaches to build a detailed picture of how the majority of known human molecules behave.

canSAR has already collated billions of experimental measurements mapping the actions of one million drugs and chemicals on human proteins, and has combined these data with genetic information and results from clinical trials.

The new version of canSAR uses artificial intelligence to identify nooks and crannies on the surface of faulty cancer-causing molecules, as a key step in designing new drugs to block them. It also allows scientists to identify communication lines that can be intercepted within tumour cells, opening up potential new approaches for cancer treatment.

The growing database now holds the 3D structures of almost three million cavities on the surface of nearly 110,000 molecules.

Cancer Research UK and the ICR together ensure that this resource is free to use for researchers around the world, giving them speedy access to key information. Dr Bissan Al-Lazikani, team leader in computational biology at The Institute of Cancer Research, London, who led the Cancer Research UK-funded team that developed canSAR, said: “Our database is constantly growing with information and is the largest of its kind – with more than 140,000 users from over 175 countries. And we regularly develop new artificial intelligence technologies that help scientists make predictions and design experiments. Our aim is that cancer scientists will be armed with the data they need to carry out life-saving research into the most exciting drugs of the future.

“Scientists need to find all the information there is about a faulty gene or protein to understand whether a new drug might work. These data are vast and scattered, but the canSAR database brings them together and adds value by identifying hidden links and presenting the key information easily.”

Professor Paul Workman, chief executive of The Institute of Cancer Research, London, and a Cancer Research UK Life Fellow, said: “The canSAR database is an important part of the overall drive to use Big Data approaches to understand and treat cancer more effectively. canSAR is a massively powerful resource that’s used globally by researchers to gain rapid and easy to use access to a huge wealth of integrated knowledge in biology, chemistry and cancer medicine. This latest research has greatly enhanced the power of canSAR to enable scientists to select the best possible targets for future cancer drug discovery and also to help them develop really innovative drugs much more rapidly and effectively than ever before for the benefit of cancer patients worldwide.”

Dr Kat Arney, Cancer Research UK’s science information manager, said: “This database  makes masses of detailed scientific information about cancer available to scientists all over the world, and will speed up crucial advances in drug discovery – ultimately saving more lives. Finding new treatments for cancer can be a long and expensive process, so anything that cuts times and costs will help to bring the next generation of therapies to patients even sooner.”
[hr] Source: CRUK