A new study suggests that changes in immune function can occur as long as five years before the diagnosis of a brain tumour that typically produces symptoms only three months before it is detected.

Using blood samples collected an average of 15 years before brain tumour diagnosis to analyse interactions between 12 allergy-related proteins, researchers looked at how those relationships differed between people later diagnosed with brain tumours and cancer-free controls.

Among people who were subsequently diagnosed with this brain tumour, called a glioma, the analysis of blood samples showed these immune system proteins sent fewer signals to each other up to five years before diagnosis. The interactions remained stronger among healthy controls.

“Now, clinicians don’t have any way to detect the tumours until patients have symptoms, which is typically three months before diagnosis. I see something five years before,” said Judith Schwartzbaum, associate professor of epidemiology at The Ohio State University and lead author of the study.

The proteins analysed, called cytokines, are those activated during an allergy-related immune response. They were selected for this study because of their involvement with allergies, which have been linked to reduced risk for glioma and its most serious form, glioblastoma. 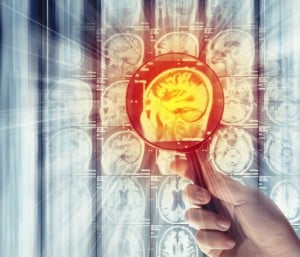 Glioblastomas constitute up to 60 percent of adult tumours starting in the brain in the United States, affecting an estimated 5 in 100,000 people. Patients who undergo surgery, radiation and chemotherapy survive, on average, for about one year after diagnosis, with less than a quarter of patients surviving up to two years and less than 10 percent surviving up to five years.

These tumours have the power to suppress the immune system, allowing them to grow, and the findings suggest the tumour’s early development could lead to detectable immune function changes years before the cancer diagnosis.

“The changes we see in immune function suggest there are localised changes long before the usual time of tumour diagnosis,” said Schwartzbaum, also an investigator in Ohio State’s Comprehensive Cancer Center. “I can’t say which are the most important cytokines because they’re all related to each other and they don’t act alone. But I see a weakening of all of their relationships in glioma patients within five years before diagnosis, and nothing like that among controls.”

The research is published in the journal PLOS ONE.

Schwartzbaum and colleagues were granted access to specimens from the Janus Serum Bank in Norway. The bank contains samples collected from citizens during their annual medical evaluations or from volunteer blood donors for the last 40 years. Norway also has registered all new cases of cancer in the country since 1953, and personal identification numbers enable cross-referencing those cases with previously collected blood samples.

For this study, the researchers analysed cytokines in the blood serum samples of 487 people diagnosed with glioma (315 of which were glioblastoma) and 487 controls who remained free of brain cancer. The blood samples had been taken an average of 15 years before those who developed tumours received the diagnosis.

When Schwartzbaum analysed correlations among the allergy-related proteins in the entire sample, she found no significant differences between people subsequently diagnosed with brain tumour and controls.

However, when she narrowed the analysis to 55 samples from patients whose blood draws were taken five or fewer years before a glioma or glioblastoma diagnosis, the diminished interaction among cytokines in the people who later developed tumours clearly emerged.

“The cytokines are not signaling as strongly to each other as the time of diagnosis approaches,” she said. “Mathematicians who have modeled immune function changes in glioma patients suggest this means the tumour is starting to direct or suppress local immune activation. And that makes sense.”

Though this sample of cases represented blood draws within five years of diagnosis, the average time to diagnosis was three years.

Among the entire group of blood samples, researchers found one other cytokine relationship that suggested allergies protect against this specific type of tumour. As long as 20 years before diagnosis, the analysis showed that higher levels of the protein IL4, which is overproduced in people with allergies, was associated with reduced likelihood of developing a glioma later in life. The association held when considering a partner protein and interactions between the two.

“This could mean this cytokine interaction has a preventive effect 20 years before a tumour would be likely to develop,” Schwartzbaum said.

This result support previous findings suggesting that allergies actually lower glioma risk. Because these tumours influence the immune system, researchers are still not sure whether allergies reduce cancer risk or if, before diagnosis, these tumours interfere with the hypersensitive immune response to allergens.